There is a lot to do about Office 365, but the Exchange Online functionality is most certainly neat. So, one of our customers wanted to migrate asap. After some reading up, we decided that a cutover migration looks the best option.

During the process it seems that it isn’t possible. The pre-reqs aren’t met.
To go short:

So we downloaded and installed the dir-sync tool from the Microsoft portal, filled in the blanks, synchronization started and the Office 365 users are created. Cool!
Next hop is creation of the mail synchronization task.
Fill in the server name, RPC over HTTP address, credentials and off we went.
So far was everything running smooth, until….. the notification that there isn’t any mail delivered to the on-premise Exchange.
So where did it go wrong?

All sync tools where cut-off and the Active Directory synchronization was stopped, but still where new messages delivered to O365 instead of the on-premise Exchange. After some fiddling around we started message tracking and noticed the “Routing” message for the synchronized mailboxes. Home come? All replicating task where deleted and there wasn’t any routing connector?

After some hours of trying, mailing and browsing Google was the answer found in the Active Directory user property targetAddress.

So to fix this, put on Advanced Features view in the Active Directory Users and Computers.
Open the property of the user(s) and click on the Attribute Editor tab: 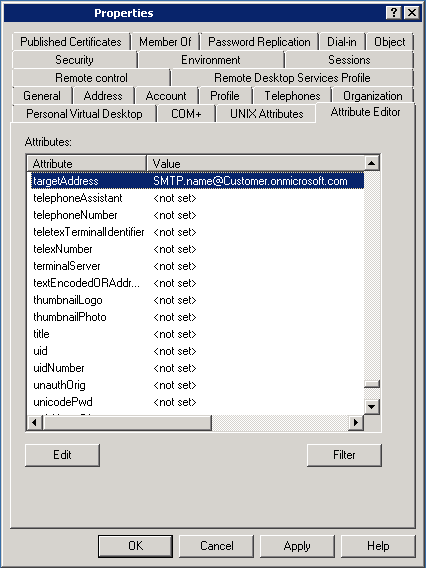 Find the targetAddress and edit the property.
By clearing this property, the external mail routing is disabled.